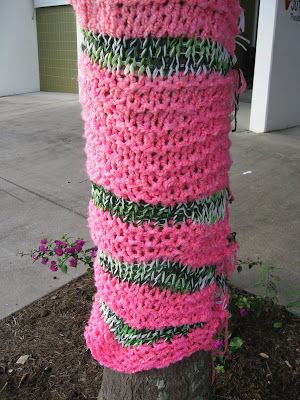 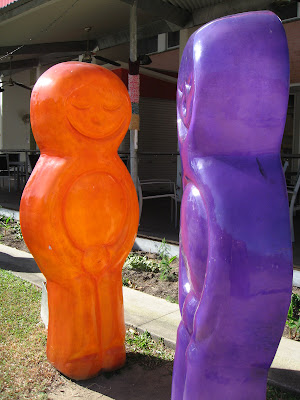 Who said knitting was for the private sphere or just for the cooler climates?? This knitting was wrapped around a (palm?) tree in Cairns at the 'Kickarts' art centre. It's also known as the Centre for Contemporary Art, but when I asked a woman on the street ('where you going love, are you lost?' ... I was peering at street numbers) she said 'the what?'.. .'oh, do you mean the one with the jelly beans?' at which point I vaguely remembered that it had some colourful sculpture out front and said 'yes, I think so' and she said 'oh, that's too fancy for us, we don't call it that, we just call it the jellybean place'. Which I thought was funny. So, sharing a picture of the sculpture too (ahem actually jelly babies not jellybeans, but that's probably too fancy to draw the distinction).
Posted by J at 11:02 AM No comments: Links to this post

Email ThisBlogThis!Share to TwitterShare to FacebookShare to Pinterest
Labels: Knitting, Public art
Newer Posts Older Posts Home
Subscribe to: Posts (Atom)
A site for crafty guys and gals who are keen on DIY, MIY and using our hands to make fabulous interesting things rather than buying factory made. An hommage to the creative spirit and creative reuse that bubbles away in us all. Part handy tips on materials, techniques and patterns, part confessional, part photo in the wallet of the proud crafty parent.
You can see more of our moderator and read about art and art therapy over at jadeherriman.com 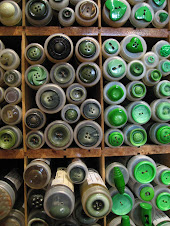